End of an Era as David, Massaro and Duncalf end Careers on Day Two of British Open

David, the iconic Malaysian who won five British Open titles and spent an unprecedented nine years at World No.1, bowed out after a 3-1 defeat to World No.3 Nour El Tayeb, with the Egyptian player winning 11-4, 11-7, 11-13, 11-5 to end David’s 21-year career on the PSA World Tour.

The 36-year-old was voted the greatest female squash player of all time in a poll conducted by the Professional Squash Association (PSA) last summer and ends her career after winning 81 PSA titles from 102 finals, which is unmatched by any other female player.

“The British Open was the thing that really kicked things off and winning that title gave me the belief that I could be one of the best on tour and gave me the confidence to win my first World title and get to World No.1,” said David, the World No.18, afterwards.

“At the time, you just never quite know until you experience it first-hand, and as the years went by, that’s when I won my second World title and things really kicked off for me. It all really started from the British Open, I can’t believe it’s nearly been two decades.

“It’s a really special time for women’s squash to see the crop that is coming through. All the top girls are all gunning for that World title, British Open title, the World No.1 spot and to see them makes me so proud to have been a part of that group.”

Preston-based Massaro, the current World No.10, won the British Open in 2013 and 2017, with the second of those wins seeing her become the first female English player in 66 years to win the sport’s longest-running title on two occasions.

In a speech full of emotion, the former World Champion said: 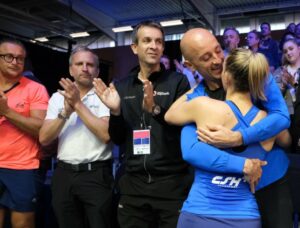 “Hull has become a special place for me. My first British Open title at the then-KC Stadium was one of the best locations we have played in England.

“To be in two finals and to win it twice is just a dream come true really. There’s not many people that can say they have won it twice and I am hugely grateful to the [title sponsors] Allams and all of the sponsors, Hull will always be special for me because of the memories I have made here and it seems fitting that even though it didn’t end with my best today, that the Allams were able to watch my last match and that it was in Hull.

“No one steps on court at seven-years-old and thinks they are going to achieve that. If hard work can get you anywhere, then it has been down to a lot of hard work. It’s been a complete rollercoaster, it’s been unbelievable highs and lows throughout my career and I’m extremely proud of my achievements – hopefully once it all sinks in then I can look back and reflect a bit.”

Gilis will play older sister Nele in the next round and, after the biggest win of her career, said: “It was mentally so hard, but I’m so happy. I gave it everything today and it paid off and it is such an honour to play Laura in her last match. I tried not to think about it being her last tournament, as if I thought about it too much then it would have made me nervous.

“I know how much this tournament meant to Laura, so I’m a bit sad for her as well, but I wish her all the best in her next chapter.” 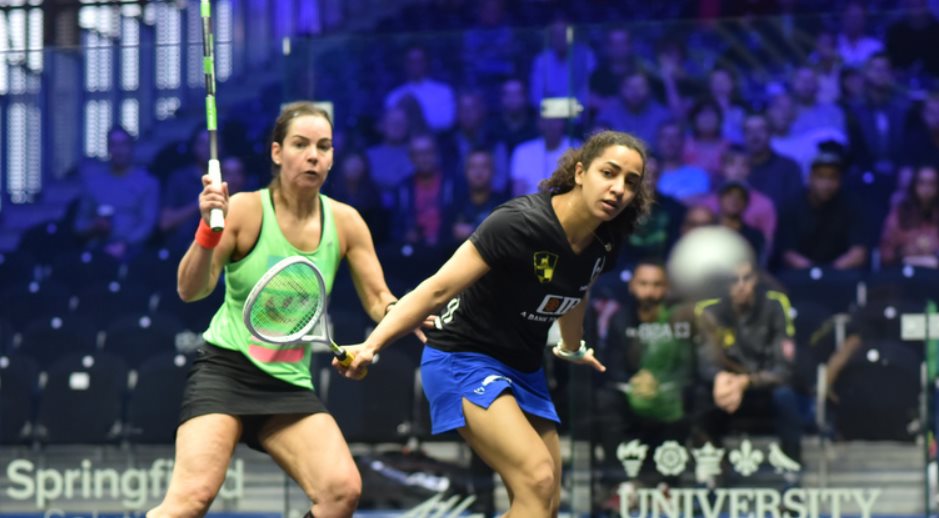 Duncalf retires with 11 PSA titles and was runner-up to David in the 2008 British Open and 2011 PSA World Championships final, and she even up MC duties later on in the day to interview David on court after her final match.

“Before I had my hip operation, I was sort of borderline retiring before the Commonwealth Games last April.” Duncalf said.

“I needed a hip operation, and I thought I would see how I got on, but it’s a struggle playing all these youngsters, and I’m so pleased to be leaving the sport in good stead. We have so many different nationalities playing the game and I feel so proud to have been a part of it and it’s definitely time for me.”

In the men’s event, six of the seven Englishmen in action exited the tournament, including three-time runner-up James Willstrop, who fell to two-time winner Mohamed ElShorbagy in straight games. 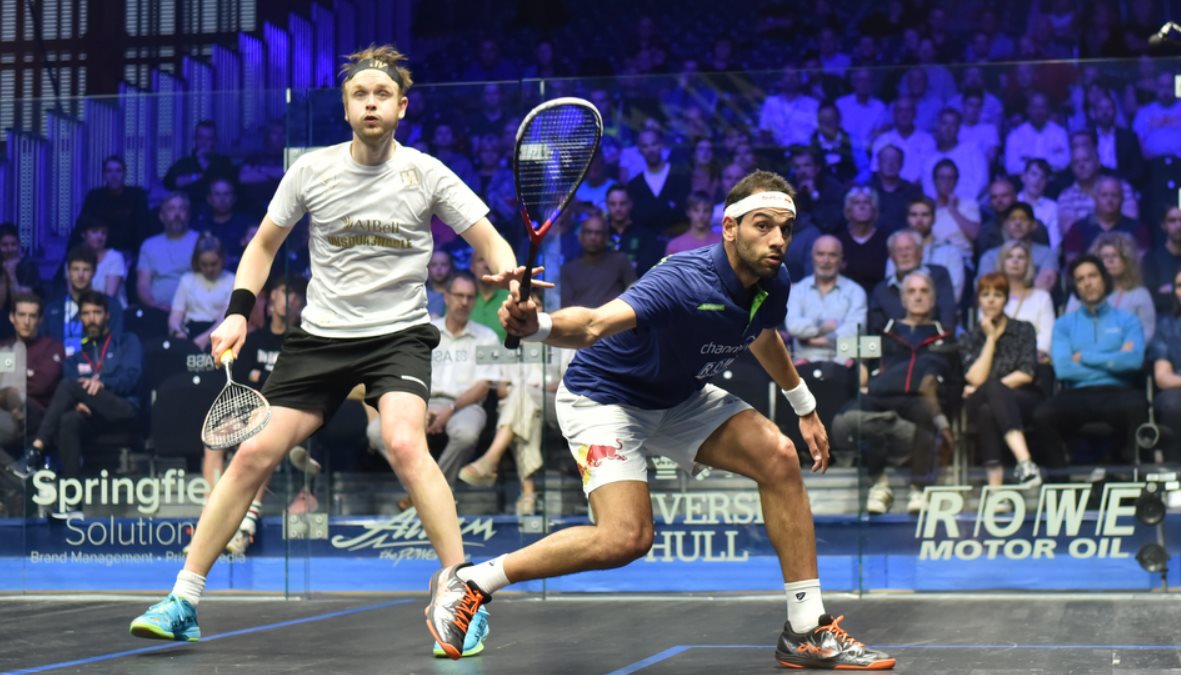 Despite the scoreline, Willstrop and ElShorbagy played out an extremely high-quality affair, with World No.2 ElShorbagy taking a trio of 11-9 victories to send Yorkshireman Willstrop out.

“The British Open is the tournament with the most history,” ElShorbagy said.

“When you win it, you’re down in the history of the sport and nobody can take that away from you. It’s the last tournament of the season and that is pretty brutal, we all have a lot of niggles, so it’s survival of the fittest this event and I’m going to give it a big push and let’s see how far I can go.”

Meanwhile, World No.15 Declan James, the highest ranked male English player, saw his tournament cut short by an ankle injury as he went down to former World No.3 Omar Mosaad.

England No.3 Daryl Selby is the only home player to reach the last 16 of the men’s draw after he beat wildcard Patrick Rooney, while ElShorbagy’s younger brother Marwan got the better of last year’s surprise semi-finalist Raphael Kandra, coming back from two games down to exact his revenge for a quarter-final defeat to the German in this tournament 12 months ago.

He will take on World No.1 Ali Farag for a place in the quarter-finals after Farag came back from a game down to beat 18-year-old Mostafa Asal in four games. 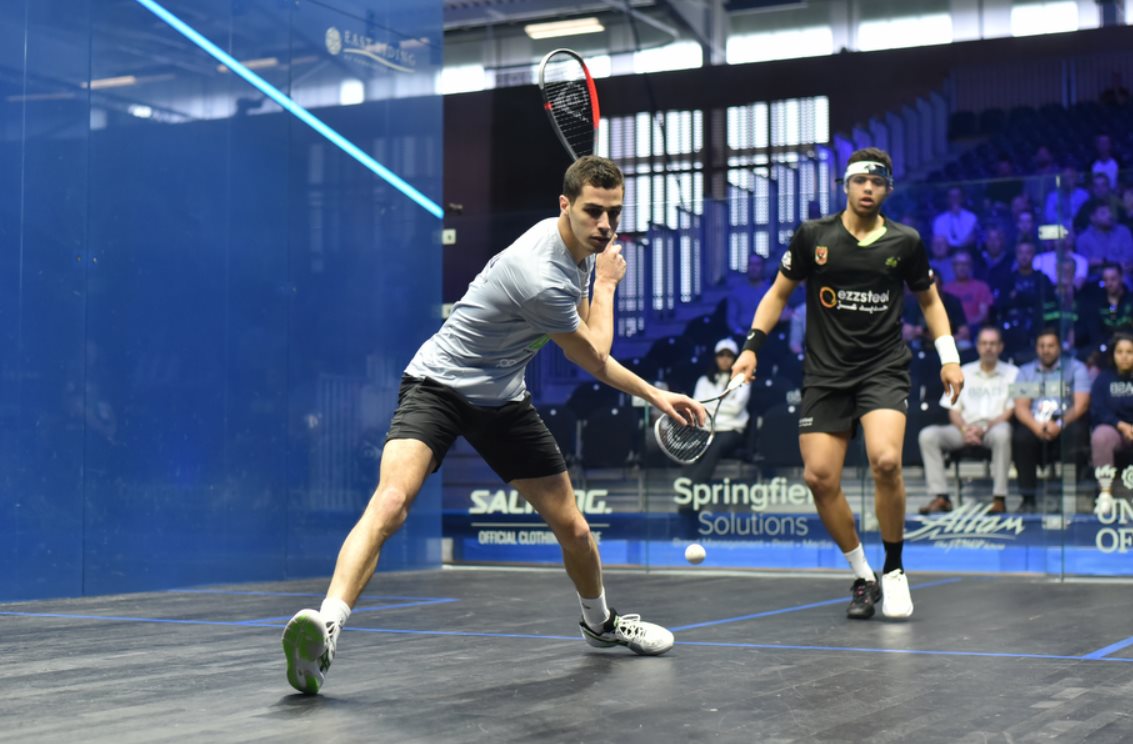 Tagged with PSA, Round Two 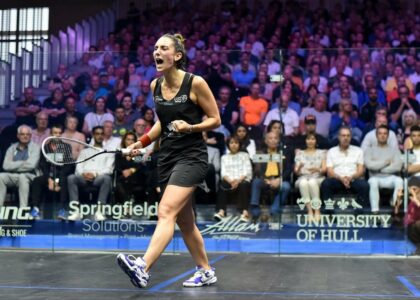 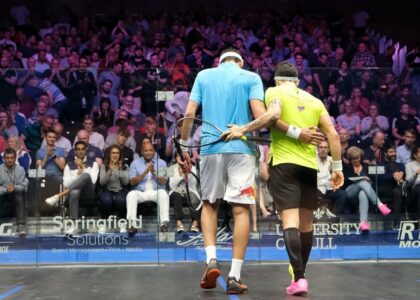 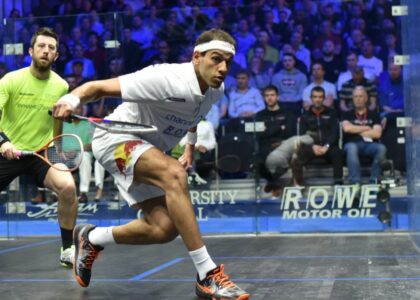