When 18-year-old Jahangir Khan dispatched Hiddy Jahan on April 8, 1982, in three straight games, it propelled him on an unsurpassed run that would see him win 10 British Open titles over the next decade.

But Khan pinpoints the previous year’s final – where he lost out to the great Australian Geoff Hunt – as being pivotal to the success that was to follow.

“It was like a dream for me to play in the British Open and to win it, and it had been my target since I started my career,” Khan says.

“Obviously I lost it the previous year and I learned an awful lot from that defeat to Geoff Hunt. So that experience was really important and my performance was much better, I was established in 1982, and despite the fact I was just 18 years of age, I was more confident in myself and that was very important.

“Hiddy was a top player and he had more experience than me and had beaten all the top players as well. Playing him in the final of the British Open was different in terms of the pressure to any other tournament then.

“Winning that first British Open final is something I will never forget as there were so many emotions attached to it in terms of joy. There was relief at having won after having lost the previous final and just great satisfaction.”

While 1982 may have been a glimpse of what was to come from the great Pakistani, Khan admits that his 1989 triumph over the Australian shot- making maverick Rodney Martin, which drew him level with the legendary Hunt’s eight-title record, was the toughest of his trophy haul.

Khan said: “In the earlier years, I beat most of the players 3-0, (Qamar) Zaman, (Gamal) Gawad, (Ross) Norman, Jansher (Khan) but in the late eighties I was after records and I was also a target for the other players, so everyone was trying harder.

“Also, as I was getting closer to Geoff’s record, there was more and more pressure, but I always prepared myself very hard for the British, I trained for three months solid for it and was in great shape. My focus was totally different at the British and also I was determined to maintain my level from the previous year.

But by ’89 you had young guys like Rodney Martin and he had upset Jansher and other top players. It was a top final and it was a very important year as I was determined to equal the record. Apart from anything else, it was just a great match.

“Plus every year there were stories like: ‘Jahangir’s run set to be broken this year.’ But I felt I handled it very well and even though I never slept well because of the pressure, I still dealt with and I took satisfaction in being able to do that.

“Really, when I started the British Open at 17 years old, I never thought I’d equal the record by winning it eight times as it just seemed so far away. Then to play 11 British Open finals, winning 10 to set a new record and losing one, well that just wasn’t a possible target for me.

“So the big years in that run were obviously the first win, the win to equal Geoff Hunt’s record and then of course when I broke the record by beating Rod again to set a new one of victories.”

When it comes to this year’s championship, Khan admits he will be paying particular attention to see how defending champion Paul Coll reacts to the pressure of being the man to beat: “Paul Coll is both the defending champion and now the World No.1 and it will be very interesting to see how he copes with all of that.

“So you have to prove to yourself that you have maintained your level from the previous year and that it is not just a one off.

“There is more pressure for Paul than last year and also in comparison to the other players. Everybody is looking up to Paul and wants to beat him as defending champion and World No.1 and this is going to be a big test for him in how he handles that.” 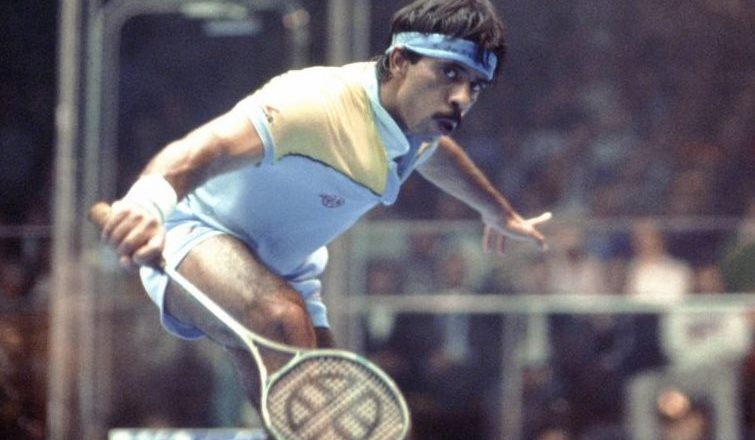